Editorial Note: We earn a commission from partner links on Forbes Advisor. Commissions do not affect our editors' opinions or evaluations.

If you are reading a review of the Centurion® Card from American Express, it’s probably not for you. First of all, you can’t apply for the card: you need to secure an invitation. The unique characteristics of the Centurion Card, both in costs and rewards, do not invite comparison. However, if you’re in the select group that can get this card, the cost/benefit analysis might just work in your favor.

More Highlights
Credit Score ranges are based on FICO® credit scoring. This is just one scoring method and a credit card issuer may use another method when considering your application. These are provided as guidelines only and approval is not guaranteed.
N/A

That said, for the biggest of big spenders, the Centurion Card can be worth every one of the million pennies that cover just the initiation fee. The upsides, which include bend-over-backwards customer service, elite travel statuses, memberships and credits to luxury outlets and lucrative points redemption options can easily offset the costs. However, the credits and perks only have value if they are of use to you.

Exclusivity is the main draw of the Centurion Card, and it’s expressed in many ways. Access to a 24/7 concierge service is a big draw if you are interested in delegating your travel planning, reservation getting and gift giving tasks. Events including celebrities of the entertainment, culinary and sports arenas are offered solely to cardholders.

The criteria used to determine if you’re worthy to even apply are nebulous, but it’s safe to say if you’re not on a first name basis with your American Express rep, the Centurion is not in your wheelhouse. Minimum spending estimates vary from $250,000 per year up into the millions.  That said, you can request consideration online if you want to give it a shot.

Something to keep in mind: the Centurion offers a personal card and a business card.  If you are given a choice, the business card offers more valuable benefits, most notably the airfare rebate.

The most interesting perk of the business version of the Centurion Card is a generous 50% rebate on airfares purchased with Membership Rewards points. This gives an effective two-cent per dollar return rate, which is more than any other American Express card offers on unlimited spending in every category. Points earned on transactions over $5,000 are worth an effective three cents when redeemed in this manner. This bonus does not exist on the personal version of the card.

American Express Membership Rewards points are valuable because they are flexible. They can be transferred to anyone of 17 travel partners, most at a 1:1 ratio. In addition, American Express offers frequent transfer bonuses, allowing you to get even more value from your points. Among the most commonly used airline transfer partners are Delta (for SkyTeam airlines), British Airways and Iberia Avios (Oneworld), and Air Canada Aeroplan (Star Alliance).

Because the American Express Centurion Card’s profile is not geared toward point earning and because spending varies so widely, it makes more sense to discuss the value of the additional benefits.

The card also comes with travel benefits that become more valuable the more they are used:

How The Card Stacks Up

It’s not feasible to do an apples-to-apples comparison of the Centurion Card to other cards, as it caters to such a small segment of the market and offers unique benefits. That said, the Business Platinum Card® from American Express offers a slice of what the Centurion does for a fraction of the annual fee.

The The Business Platinum Card® from American Express (Terms apply. See Rates & Fees.) has a $695, which seems like a bargain only when compared to the Centurion’s $5,000. Some benefits, such as airport lounge access (albeit without a dedicated section in the Centurion Clubs) and hotel and car rental statuses, are the same with both cards. However, the Centurion offers Hilton Diamond, Delta Executive Platinum, and Hertz Platinum, which the Platinum does not.

While the Centurion may offer much in the way of statuses, the American Express Business Platinum grants significantly higher rewards: 5 Membership Rewards® points per dollar on flights and prepaid hotels through American Express Travel, Earn 1.5X points on eligible purchases at US construction material & hardware suppliers, electronic goods retailers and software & cloud system providers, and shipping providers, as well as on purchases of $5,000 or more everywhere else, on up to $2 million of these purchases per calendar year. Earn 1 point per dollar on all other eligible purchases. 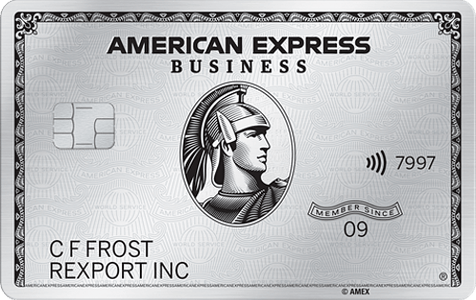 Forbes Advisor created additional star ratings so that you can see the best card for specific needs. This card shines for this use, but overall the star ratings may differ when compared to other cards.
Apply Now

Up to 5X Reward Rate

Why We Picked It

The Business Platinum Card® from American Express is the quintessential status card for high-spending, frequent-flying business owners and their employees. If sufficiently leveraged, the card's robust benefits are well worth the high annual fee.

Pros & Cons
Card Details
Earn 120,000 Membership Rewards® points after you spend $15,000 on eligible purchases with the Business Platinum Card within the first 3 months of Card Membership.
Credit Score ranges are based on FICO® credit scoring. This is just one scoring method and a credit card issuer may use another method when considering your application. These are provided as guidelines only and approval is not guaranteed.

Is The Card For You?

If you have to ask, the answer is likely no. The Centurion Card is for an extremely narrow slice of the market and will provide value to a narrower slice still. But if you’re an extremely high spender who values exclusive access and top-tier customer service, the Centurion Card just might belong in your wallet.

Costco Anywhere Visa Card By Citi 2022 Review
The , from our partner, Citi, could stand on its own as a top-tier cash-back credit card. With rewards of and no annual fee with your paid Costco memb...
USAA Rewards Visa Signature Credit Card 2022 Review
Earning , the no-annual-fee USAA Rewards Visa Signature Credit Card isn’t a great card, but it may be a convenient choice for those who bank or insu...
Bank of America Premium Rewards Elite Visa Infinite Review
...
Choice Privileges Visa Signature Card Review
Issued by Barclays Bank, the no annual fee is not a particularly well known product but what it lacks in recognition, it makes up for with its solid e...
Aeroplan® Credit Card 2022 Review
The charges a annual fee for a moderate array of travel benefits, above-average reward earning potential and solid Air Canada-related perks. Cardmembe...
Bank of America Business Advantage Travel Rewards Credit Card Review
A solid business rewards card with and no foreign transaction fees, the is truly oriented at going places. With solid travel-related benefits, the car...
Information provided on Forbes Advisor is for educational purposes only. Your financial situation is unique and the products and services we review may not be right for your circumstances. We do not offer financial advice, advisory or brokerage services, nor do we recommend or advise individuals or to buy or sell particular stocks or securities. Performance information may have changed since the time of publication. Past performance is not indicative of future results.

Forbes Advisor adheres to strict editorial integrity standards. To the best of our knowledge, all content is accurate as of the date posted, though offers contained herein may no longer be available. The opinions expressed are the author’s alone and have not been provided, approved, or otherwise endorsed by our partners.

Dia Adams is a noted family travel expert and a real-life Mom of two teens in the DC Metro area. She has visited over 45 countries and lived in Thailand, China, and Ireland (where her son was born). Her kids have over 20 stamps in their own passports. Her passion lies in showing families how to travel more while keeping their savings and sanity. Her guidebook, Disney World Hacks, is a bestseller on Amazon.

The Forbes Advisor editorial team is independent and objective. To help support our reporting work, and to continue our ability to provide this content for free to our readers, we receive compensation from the companies that advertise on the Forbes Advisor site. This compensation comes from two main sources. First, we provide paid placements to advertisers to present their offers. The compensation we receive for those placements affects how and where advertisers’ offers appear on the site. This site does not include all companies or products available within the market. Second, we also include links to advertisers’ offers in some of our articles; these “affiliate links” may generate income for our site when you click on them. The compensation we receive from advertisers does not influence the recommendations or advice our editorial team provides in our articles or otherwise impact any of the editorial content on Forbes Advisor. While we work hard to provide accurate and up to date information that we think you will find relevant, Forbes Advisor does not and cannot guarantee that any information provided is complete and makes no representations or warranties in connection thereto, nor to the accuracy or applicability thereof. Here is a list of our partners who offer products that we have affiliate links for.
lorem
Are you sure you want to rest your choices?